My birthday treat from Jane.

Although I list Roxy Music as probably my all time favourite band I have never actually seen them live for one reason or another. I saw Eno just after he left the band and released Never Mind The Warm Jets at the Croydon Greyhound.

If you think Roxy Music is just Bryan Ferry you are wrong. Mackay, Manzanera and Thompson are just as important. Roxy Music is greater than the sum of its parts.

They were excellent. The gig was recorded so hopefully it will appear as a DVD at some point in the future. 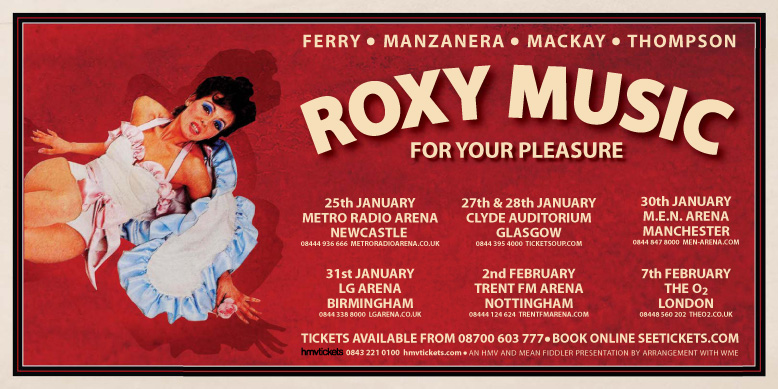 Christmas has come and gone and I have to report that not a single new gadget found its way underneath the tree for yours truly – unless you count a new razor. Instead I had to make do with a couple of books (one of which I bought myself) and some new CD’s (most of which I also bought for myself). My “official” present was received back in October – the personalised number plate for my new Alfa Giulietta – which I suppose is a bit like a gadget.

I have to confess that on the one hand I like Christmas and on the other I hate it. I like the break from the work, the obligatory Christmas dinner and some of the stuff that appears on the TV – stuff like Morecambe & Wise or Only Fools & Horses. I dislike the fact that it costs a fortune, and that if you are a male you never seem to get a decent present after you are 25 and that it and New Year drag themselves on long after their sell buy date.

Big plus this year is the Ashes. Have stayed up until “lunch” most days to witness England truly demolish a very poor Australian team. As I write it looks like 3-1 is a formality sometime very early tomorrow morning.  The only chance I can see of the Australian’s forcing a draw is if Sydney Cricket Ground is suddenly and magically relocated to Rockingham in an overnight miracle.