Apparently until last week it hadn’t snowed in Rome for 25 years! It is snowing again as I write. Jane and I are here for the Rugby. We were going to be staying in a place called Fumone about an hour or so south of Rome and in the mountains but to say it has snowed in Rome is nothing to the snow they have had in Fumone which is 800m above sea level.
We learned the situation on Wednesday so Jane and I, who were flying to Rome, booked ourselves a hotel in the city. The main party (now depleted) have flown to Naples and managed to get themselves to Fumone somehow. Apparently homemade snow chains on the hire car have been involved (pictures awaited). Given that we didn’t arrive at FCO until 4pm there is no way we could have done what the others did.
The tickets for the match are in Fumone so at least the guys now have those. Whether the match will be on and whether they can get out remains to be seen. It is now snowing fairly heavily in Rome. 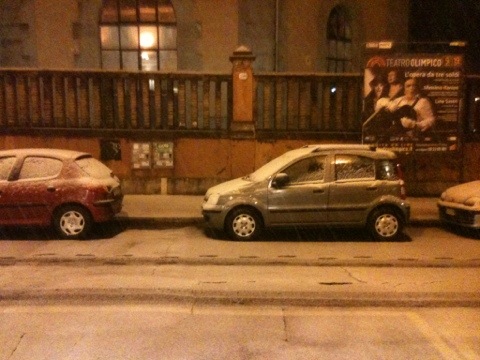